One sure way to tell if I have recently been using tools to assemble some doo-dad around the house is to check in at the Church on Saturday afternoon around 3:00. That’s when confessions are heard in our parish, and I usually have to go to confession after building any object that involves more than one part. Moving or otherwise.

However, He has seen fit to balance the scales by equipping me with the mechanical aptitude of a mango. If there is no possible way to put something together wrong, I will find it.

I have parts left over when I finish looking in the mirror – That’s how bad it is.

Now, don’t get me wrong… In the long run, I am perfectly capable of putting things together. But there are some things that, over the years, I have noticed about my own special process.

While all of these things have been going on for years, it was only yesterday that I realized why thing 1 takes place. It’s because I sometimes actually put things together two, three or four times before I throw in the towel and simply declare that “It is finished!” (Fortunately, nothing has, yet, fallen apart using this exit strategy.)

It’s actually a pretty handy thing to have and, other than the fact that it didn’t look anything like the floor model (mostly because there was ‘some assembly  required’) when I ripped open the box, it is probably the best $30.99 plus tax I have ever voluntarily relinquished to True Value Hardware Stores.

I was so excited when I found it. I was actually looking to replace the folding plastic saw horses that somebody made off with after the house burned down. This was so much better, and so much less expensive!

Sadly, my mood changed when I saw several plastic bags float to the garage floor upon my opening the box. You see, plastic bags are nature’s way of hiding nuts, bolts, screws and whatever pathetic screwdriver/wrench/hammer/drill/shovel combination tool that the manufacturer inserts into the box with the picture of the fully assembled and operational product on the outside.

There was, of course, most of an instruction manual. 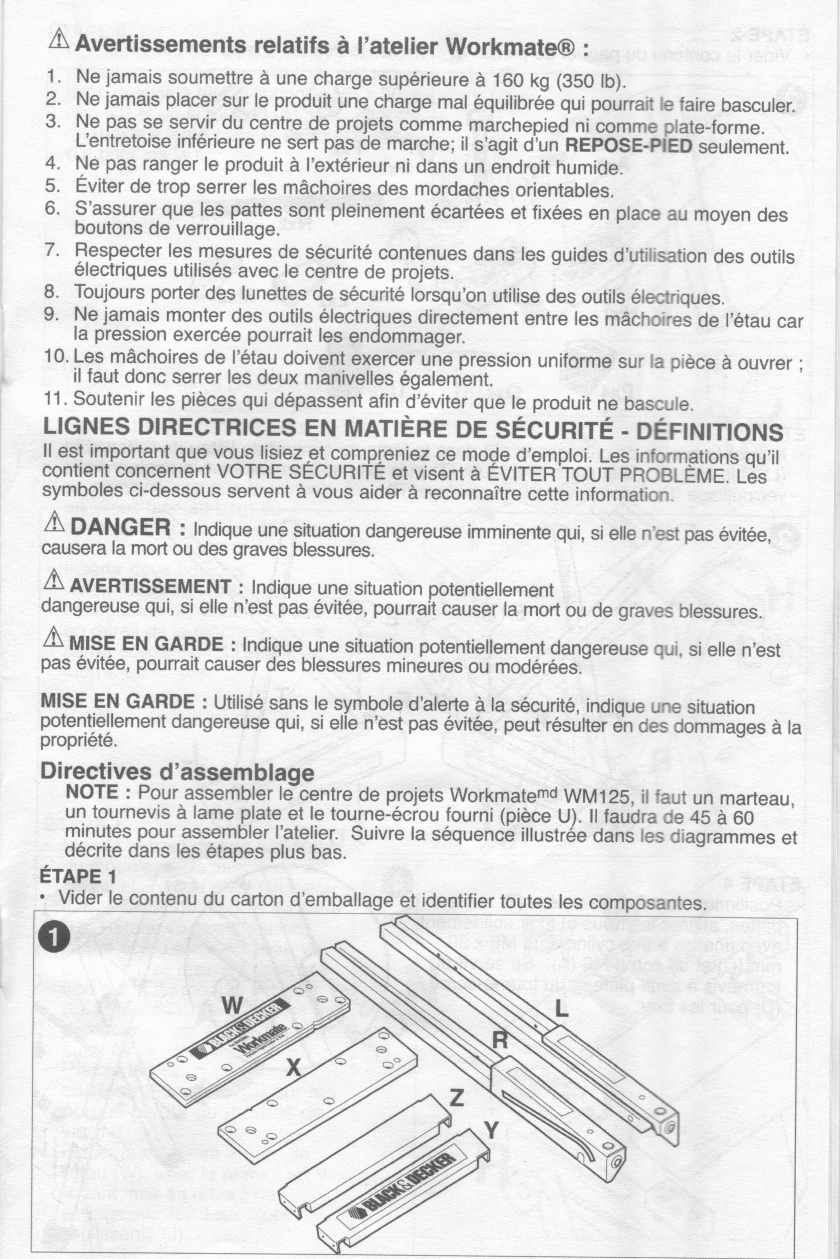 This project actually went (for me) pretty smoothly, once I figured out that the actual artwork (pictures) were mostly in English. It only  took me 2 hours and 27 minutes from start to finish. And I only had to disassemble and reassemble twice during the entire process. Somehow, I had managed to reverse parts X and Y when attaching them to parts R and L. But it wasn’t entirely my fault – I did that before I realized that those letters in French are actually pretty much the same as they are in English…